During the last decade much investor focus has turned to emerging markets. The 2000’s saw the S&P 500 in the United States remain relatively unchanged over a 10 year period. This lack of growth in domestic equity markets has caused many investors to be drawn to the staggering possibilities of growth in emerging market economies such as Brazil,  South Africa. During times of heightened global risk appetite there tends to be a massive amount of capital flow into these emerging markets as investors seek increased yield. One country that has stood out as an investor favorite over the last decade has been South Africa. 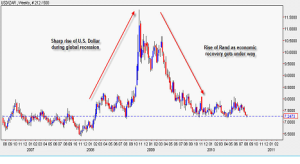 You can see that during the early stages of the 2008 Crisis the U.S. Dollar made a huge and drastic move against the Rand as investors pulled capital from risky assets, such as the Rand, and placed it in the safety of U.S. Dollar-denominated government debt investments and AAA corporate bonds. This mad rush to safety finally peaked out at the beginning of 2009, and as the recovery began to bring economic growth back to the world economy, investors once again began betting on the Rand due to its higher yield, and you can see the rapid strength of the Rand during 2009. In 2010, the Dollar Rand has moved sideways in currency trading as investors are unsure about the global recovery.

The high yield associated with the Rand is what has caused it to be a favorite among currency traders when risk appetite is in the market. The South African Rand is currently offering an interest rate of 6.5%. Conversely, the United States is currently offering an interest rate of .25%. If you were an investor, would you rather have your money earning 6.5% or .25%? This is what drives the Rand up versus the Dollar during times of global economic growth. 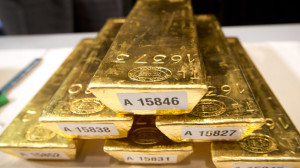 South Africa is a country with very rich mineral deposits. Therefore, its economy is heavily dependent on commodity prices, specifically gold. South Africa has incredible amounts of gold reserves, but the lack of economic infrastructure has weighed on South Africa’s gold output in recent years. For example, a few years ago the country experienced extended blackouts as the national electrical power provider ran into serious supply problems. This caused a major shortage of gold exports during that time, and these types of scenarios can weigh heavily on a fragile, emerging market economy. As the price of gold has risen dramatically in recent years, and is currently close to its all-time highs, this has helped to spur economic growth in South Africa, and it has helped bring further strength to the Rand. When foreign nations want to purchase South Africa’s gold, they, of course, have to convert into the Rand to make those purchases and as this capital flows into South Africa, its currency will appreciate. 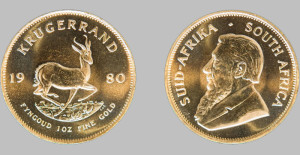 The words of the national anthem of South Africa

Sounds the call to come together,
And united we shall stand,
Let us live and strive for freedom,
In South Africa our land.